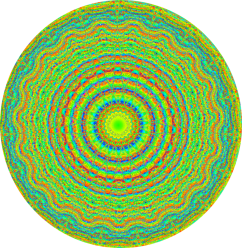 The Structure of the Monolith gallery opened November 8,1999 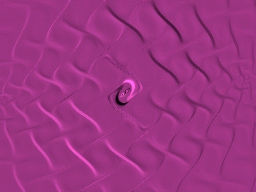 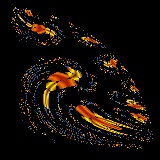 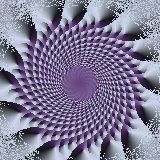 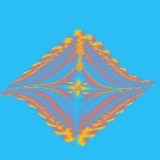 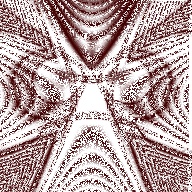 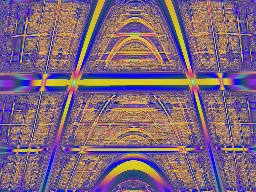 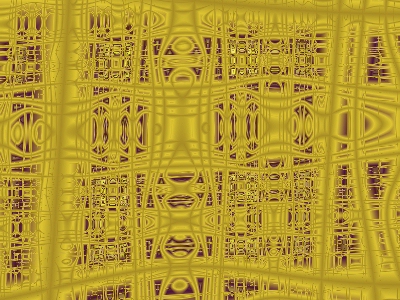 Welcome to my galleries of fractal images.The galleries contain a few hundreds images and are maintained using a Filemaker database. For some images I provide also the parameters that will allow you to reproduce them by using a fractal program like Ultrafractal(upr or par file) or Fractint(par file).

In addition to the usual presentation in galleries,you can look at a list of all images with miniatures.

You can browse the images one by one in chronological order starting from the first or the last added.

Or you can start a slide show of images taken randomly from the data base.Every minute you get a new image.

If you have Ultrafractal,here is the file zg.frm containing all the formulas used.Download it in the Formula directory of Ultrafractal.Each new image created has normally a parameter file that refers to formulas in this file.

If you want to know from where these images come,here are some simple formulas used to generate some of them.

How I create these images

Images coming from formulas found by program ufattr
These images are generated by chance from a data base of around 50,000 planar dynamical systems. The formulas for these dynamical systems were found by running a computer program called ufattr for many months.The program would try random formulas saving only those that would produce an image(attractor) in a given window. To produce the final image I use another program that will represent these dynamical systems in many ways. In a first phase I choose some promising formula out of the data base. Then I start playing with this formula by changing the parameters one by one in a given range. If still nothing interesting comes out I will start breeding the chosen formula with a random one from the data base and looking at the result. I use for this a genetic algorithm. This process of selection will continue until I get the final image. Normally I have to look at hundreds of miniatures until I got something new and interesting. Most of the images are either boring,because have been already found in the past, or are too random to be appealing. Most of the images but not all are fractals and in this case zooming is essential to get the interesting part. I use always the same "rainbow" palette, so also the color that I get is produced by chance. Only seldom I manipulate the palette after the image has been selected. The program ufattr is described in Drawing by accident and in a post to sci.fractals.
If you want to play yourself with this method I have some of the programs that I use written in Java. ufattr.java and ufattr.class contain a java application which generates random formulas writing them on disk. select is a applet used to examine the formulas found by ufattr and choose the good ones. When you are happy with a formula you click on "decode" and the formula is converted in a format that can be cut and pasted in a Fractint/Ultrafractal formula file. (To install select on your computer just copy all files in the following directory on your computer.The file containing the formulas found by ufattr is called ufattrou).

Ultrafractal rendering of dynamical system formulas
The images with a upr file have been rendered using Ultrafractal. The upr file contains always a formula of a a planar dynamical system found by chance by program ufattr.This explains why these formulas are sometime very "strange". Anyhow,some of these formulas have been "reconstructed" and produced in the normal algebraic notation: you find these collected here.

Fractint rendering of dynamical system formulas
The images with a par file have been rendered using Fractint. These are all of type formula where the formula is a planar dynamical system found by chance from program ufattr.This explains why these formulas are sometime very "strange". For the palette I seldom create them but prefer to use palettes provided with fractint or included in some image available on Internet.

Other images created with a genetic algorithm
Most of these images are obtained with a genetic algorithm. I have an "alphabet" of 16 letters each corresponding to a simple function like sin(x) that, when applied to each pixel value of a image, will return a new pixel value and thus a new image. First I generate random "words" from this alphabet with a maximum of 100 letters. These words are transformed in images starting from one with all pixels set to 1. An example of this first set of around 50 images is seen here. In the next step I select 3 of these and in the next set of images half are produced by random mutations of these 3 ,the rest completely randomly like the first ones. I proceed in this way until I get a promising image that I would look in a bigger size and eventually save. No attempt is done,up to now, to breed two images.

About the data base
If you are curious about how I use Filemaker to maintain the fractal gallery, you can download the Filemaker database.All information is kept in the database and I create the html exporting fields from the database.Note that the database contains only the URL of images which are stored in many places around the world.

What are fractals?
Fractals are both natural objects and phenomena like clouds or videofeedback and also images produced by very simple computer algorithms. The most important feature of fractals is the fact that the same pattern will repeat itself at smaller scale again and again. Just consider a tree:it is a fractal since its branches look like smaller trees. And the smaller branches like even smaller trees, etc. I am just starting to capture Nature fractals with a camera.

This page has replaced all my previous fractal galleries. But I keep still them with the names G. Zito pictures, Catalog of fractal images and Explorations in computer graphics . Have you visited my Algorithmic Image Gallery?